From the first blog post on the First Native Americans we defined three possible theories for the how, when, and where our first citizens came into North America.

This post covers the information I have found on the Beringia theory.  (Keep in mind, I’m and Engineer which means spelling and grammar are not my strength.)

A drop of sea level by about 200 ft to 400 ft occurred around 30,000 years ago during the Wisconsin Glacial Period.  This allowed the formation of Beringia, an ice packed land that included a land bridge connecting Asia with Alaska across what is now the Bering Strait.  This land bridge, while available, provided a migration path from Asia to North America for people and animals.  Beringia was an extremely large land mass over 620 miles wide and covering what is now Alaska, British Columbia, and the Yukon.

The major migration is considered to have happened in phases, not including the possible small hunting units that initialized theses migrations.  After the first large migration group came into Beringia as far back during the 13,000 to 25,000 years ago period, subsequent groups followed at a much later dates.  Around 2,500 to 8,000 years ago the Eskimo -Aleut and the Na-Dene speaking people of the arctic region of North America made their arrival in Beringia using water crafts for crossing the strait.

A recently published Harvard research study indicates that most Paleo – Americans did migrated from Siberia during the last glaciation period (around 30,000 years ago).  From Harvard’s DNA research there appears to be a commonality between the population of a specific eastern Asian location and today’s Native American populations. The Specific Eastern Asian location was found to be east of the Yenisey River within the Altai Mountain Range of southern Siberia.

Archaeological finds indicate possible human occupation of Beringia which leads to the conclusion that Beringia could very well have been occupied by Paleo-Americans around 30,000 years ago.

One of more significant archaeological sites is in the Yukon Territory and named Bluefish Caves which is located 34 miles southwest of the community of Old Crow.  A specimen of allegedly human- worked mammoth bones located here have been radiocarbon dated to 28,000 years ago, providing a generally-accepted age range for habitation of Beringia.

Location of Bluefish Cave Archaeological Site in the Yukon

Evidence of Paleo- Americans within the interior of North America, considering dated archaeological discoveries, was not evident until around 13,000 to 15,000 years ago.  This implies that the Paleo -Americans very well could have stayed in Beringia for up to or more than 17,000 years prior to migrating into the North America interior. 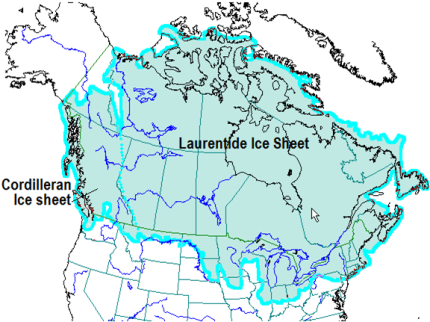 The inhabitants of Beringia during this extended time period had to deal with a desolate and cold land that was snow cover and that experienced severe winter storms.  Spring would bring on rains needed for edible vegetation for animal grazing and larger herds of animals for hunting.

Animal sources would have included mammoths, bison, caribou, deer, saber-tooth tigers, rabbits, and antelope some of which migrated into Beringia from Siberia the same as the Paleo-Americans.

Paleo –Meteorological data  shows that there was a thawing period that started around 20,000 years ago that provided ice free passages in a gap between the Cordilleran ice mass and  the Laurentide ice mass.  This opened the way for migration into the interior of North America.  Many specific passages were most likely made available but most historians will agree on these:

Map of the Ice-Free Corridors into Interior of North America

Once into the interior the Paleo-Americans could have moved swiftly across North America using multiple navigation routes including the many rivers systems and the coastal paths.

The Beringia Theory is partially confirmed with the discovery of spear points near Clovis, New Mexico (Blackwater Locality No. 1) in the early 20th century (around 1929) that closely matched the kinds of artifacts found in Beringia.

Carbon dating has shown that the discovered spear heads, which are now referred to as part of the “Clovis Culture”, are around 12,000 years old. Traditionally the matched discoveries at Beringia and Clovis have been seen as direct evidence that the Beringia Theory and the timeline of migration into America are valid and establishes the “Clovis First” hypothesis.

In 1968 the remains of Paleo-American male infant found in Montana and given the name of Anzick-1.  Analysis showed that the infant dated back to 12,500 to 12,700 years ago.  The child‘s method of burial suggest an honorary burial and artifacts found with the child were of Clovis Culture lithic technology.  Recently Anzick-1 became the first ancient American genome (an organism’s complete set of DNA) to be fully sequenced. Paleo-Genomic analysis of the remains revealed Siberian ancestry.

In the 1998 discoveries at the Gault Archeological Site, in Florence, TX followed by excavation findings at Buttermilk Creek, TX in 2011 (located just 14 mile away) scientists claimed to have found occupational evidence that suggests a culture that existed before Clovis by as much as 450 years.  The “Clovis First” hypothesis has been challenged; however this find does not challenge the Beringia Theory.

In 2007 the human skeleton of a teenage female was found in the Yucatan, Mexico and was given the name “Naia”.  Age analysis indicates she lived 12,000- to 13,000 years ago.  Paleo-Genomic analysis shows that she has a definitive genetic link with the earliest American that came from Beringia.  Further DNA study in 2014 confirmed this finding and further found strong evidence of a tie with populations in Siberia.

Haplotype analysis has been performed in recent years.

A haplotype is a group of genes in an organism that are inherited together from a single parent, and a haplogroup is a group of similar haplotypes that share a common ancestry.

That’s it for now.  Next post will be on the Solutrean Theory.

Thanks for your interest.